Prayer For Justice for the Poor and Helpless Loving Lord, thank You for the wonderful example of Your life, which was lived in spirit and truth – a life that demonstrated love as well as justice – a life that cared for all humanity, especially those that are weak or hurting or marginalized - or those that are sinking into a pit of despair or poverty.
Amen
Spend some time reflecting on areas that you may not have lived up to respecting human dignity and/or call to the family, community, and participation. 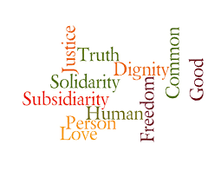 Reflect and journal on the words in this word prayer.
Prayer for Peace and Justice:
God, source of all light,
We are surrounded by the darkness of
the injustices experienced by your people,
the poor who are hungry and who search
for shelter, the sick who seek relief,
and the downtrodden who seek help in
their hopelessness.
Surround us and fill us with your Spirit who is Light.
Lead us in your way to be light to your people.
Help our parish to be salt for our community
as we share your love with those caught
in the struggles of life.
We desire to be your presence to the least among us
and to know your presence in them as we work through you
to bring justice and peace to this world in desperate need.-
United State Catholic Conference, Department of Social Development and World Peace, Communities of Salt and Light: Parish Resource Manual

Rerum Novarum  is considered a foundational text on modern Catholic Social Teachings. It is an encyclical written by Pope Leo XIII in 1891. It addresses the rights and duties of capital and labor. It is rather lengthy, so you may prefer to read the summary instead. 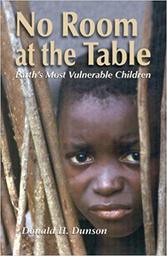 No Room at the Table A cry that touches our hearts and awakens our desire to help - in some way - the hundreds of thousands of children around the world who are at risk. Overwhelmed by poverty, war, hunger and separation from family, they are not allowed to be children. They carry guns, they sell themselves to buy food, they live on the streets. Donald Dunson tells the stories of our children from New Orleans to the Sudan. Each chapter profiles three or four individuals as it probes an issue affecting children, including hunger and poverty, war and sexual exploitation, homelessness and the need for love. No Room at the Table concludes with a list of resources for involvement and action. It is an eye - and heart - opening work. 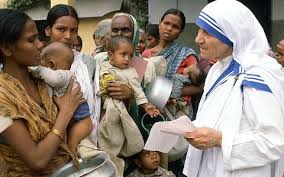 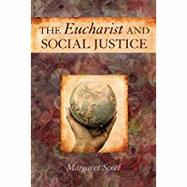 The Eucharist and Social Justice connects the Mass with social teachings. 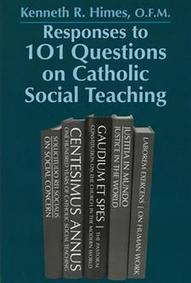 All the answers to your questions are found in this book,​ available at Paulist Press. 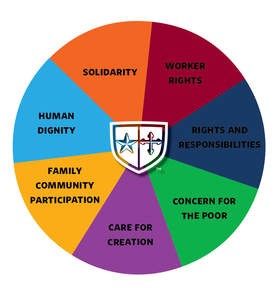 ​The first theme is Life and Dignity of the Human Person-Every person is created in the image of God. Every person is precious. All social laws, practices, and intitutions must protect human life and human dignity from conception to natural death. "All offenses against life itself, such as murder, genocide, abortion, euthanasia and willful suicide: all violations of the integrity of the human person...all offenses against human dignity, such as subhuman living conditions, arbitrary imprisonments, deportation, slavery, prostitution, the selling of women and children, degrading working conditions where men are treated as mere tools for profit rather than free and responsible persons: all these and the like are criminal: they poison civilization...and militate against the honor of the creator."-Second Vatican Council, Pastoral Constitution on the Church in the Modern World.
​
The second theme is Call to Family, Community, and Participation-We are social beings. We realize our dignity and human potential in our families and our community.  The family is the basic unit of society and it must be supported. "It is necessary to go back to seeing the family as the sanctuary of life. The family is indeed sacred: it is the place in which life-the gift of God-can be properly welcomed and protected against the many attacks to which it is exposed, and can develop in accordance with what constitutes authentic human growth. In the face of the so-called culture of death, the family is the heart of the culture of life."- Pope John Paul II, On the Hundredth Anniversary of Rerum Novarum (The beginning document on social teachings written by Pope Leo XIII in 1891)

​The third theme is Rights and Responsibilities. The Church upholds both personal responsibility and social rights. The right to life is fundamental and includes a right to food, clothing, shelter, rest, medical care, and essential social services. Every person has the right to raise a family and the duty to support them. Human dignity demands religious and political freedom and the duty to exercise these rights for the common good of all persons. "It is not right...for either the citizen or the family to be absorbed by the state; it is proper that the individual and family should be permitted to retain their freedom of action, so far as this is possible without jeopardizing the common good and without injuring anyone."-Pope Leo XIII, On the Condition of Workers (Rerum Novarum), no. 52

The fourth theme is Option for the Poor and Vulnerable. "Catholic teaching proclaims that a basic moral test is how our most vulnerable members are faring." The Church does not pit one social group against another but instead follows the example of our Lord, who identified himself with the poor and the vulnerable. Giving priority concern to the poor and the vulnerable strengthens the health of the whole society. "The prime purpose of this special commitment to the poor is to enable them to become active participants in the life of society. It is to enable ALL persons to share in and contribute to the common good. The 'option for the  poor,' therefore, is not an adversarial slogan that pits one group or class against another. Rather it states that the deprivation and powerlessness of the poor wounds the whole community. The extent of their suffering is a measure of how far we are from being a true community of persons. These wounds will be healed only by greater solidarity with the poor and among the poor themselves."- National Conference of Catholic Bishops, Economic Justice For All, no. 88

The fifth theme is The Dignity of Work and the Rights of Workers. "Work is more than a way to make a living; it is a form of continuing participation in God's creation." Workers have rights to decent work, just wages, safe working conditions, unionization, disability protection, retirement security, and economic initiative. The economy exists for the human person; the human person does not exist for the economy. Labor has priority over capital.

The sixth theme is Solidarity. "We are one human family, whatever our national, racial, ethnic, economic, and ideological differences." The Church speaks of a "universal" common good that reaches beyond our nation's borders to the global community. Solidarity recognizes that the fates of the peoples of the earth are linked. Solidarity requires richer nations to aid poorer ones, commands respect for different cultures, demands justice in international relationships, and calls on all nations to live in peace with one another.

The seventh theme is Care For God's Creation. "We show our respect for the Creator by our stewardship of creation." Good stewardship of the earth and of all its creatures (including human beings) is a complex challenge. Humans are part of creation itself, and whatever we do to the earth we ultimately do to ourselves. We must live in harmony with the rest of creation and preserve it for future generations. 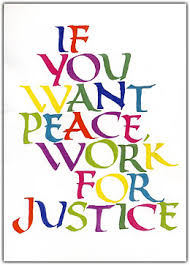 Be the change you want to see in the world.
Look for ways that you can respect human dignity in your community and act on it.
Find one way to participate in the call to community and participation.
Make a list of responsibilities that we have as citizens of city, state, and country. Where have you fallen short?​
Studies have shown that young adults prefer hands-on faith in action. Look up the difference between charity and justice.  Put your hands into action this week in one form of justice.

"Clearly, there are some problematic aspects of union activity. Yet Catholic social teaching contends that a world without labor unions would witness a much less favorable environment for achieving justice and an equitable sharing of the earth's resources. Without the ability to combine their voices through organized labor, workers would be at the mercy of their far more powerful employers who might take advantage of their inferior position."- Living Justice, Thomas Massaro, S.J.
Reflect on your personal feelings about unions. Do you agree with them or disagree with them? Do you think that there is any difference in unions now than there was when Pope Leo XIII wrote Rerum Novarum in 1891?

"Solidarity calls attention to the simple and easily observable fact that people are interdependent; they rely upon each other for almost all their biological and social needs."-Living Justice, Thomas Massaro, S.J.
Take time this week to notice all of the different ways you are depending on someone else for your basic needs. Make a list and marvel at all the ways we depend on other people. What are some ways you can work for the "common good"?

Reduce, Reuse, Recycle-these are in the order of importance. First REDUCE the amount of waste you use ( buy in bulk, buy fresh fruits and vegetables un-packaged, use reusable water bottles). If you can't reduce, then REUSE (find creative ways to reuse items that are no longer serviceable in their original intent). And if all else fails, RECYCLE. Remember, how we treat the earth now will affect the world we leave our children!
​
​Reduce your carbon footprint. Here are two sites with ideas on reducing your carbon footprint. Obviously, most people cannot do all of these things, but challenge yourself to take on at least 2 of them. Then add more as time goes on. https://cotap.org/reduce-carbon-footprint/  and  www.globalstewards.org/reduce-carbon-footprint.htm